The U.S. unemployment rate is currently seven point nine percent, over 15 million Americans have filed for unemployment insurance since the pandemic began in March 2020, and it is still not clear when the economic recession will end.

If you wanted to get a graduate degree right now, it would probably look something like this. The question is, is this worth it? 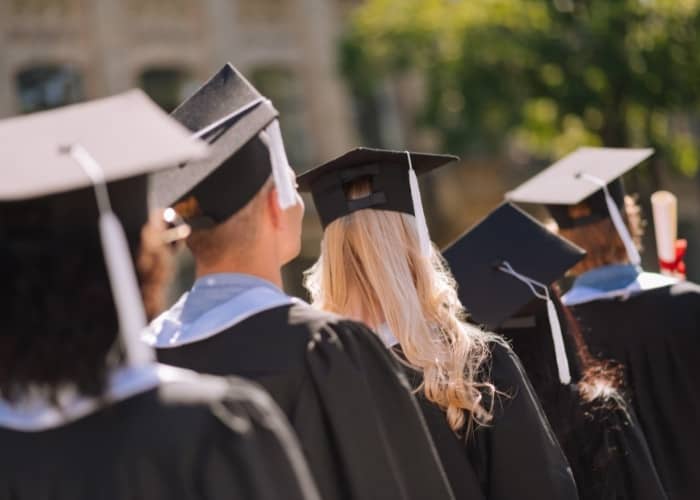 One of the first things you learn in Economics 101 are two words: Opportunity cost. The opportunity cost is what you have to give up to acquire something.

Historically, we see people go to college in recessions because in a time when there are few jobs during the recession, the opportunity cost of going to school is quite low. In 2007, there were some 17 ,956,000 colleges in the United States, including three million five hundred ninety one thousand graduate students.

By 2011, that figure increased roughly 14 percent to include over 20 million total college students. There are two countervailing forces. One is, you know, the economy is this bad? And so this is a good time to go back to school that with pushed generally push more people to go to college. And the other hand, the pandemic is really disrupted how we provide schooling.

Early data suggests that these countervailing forces are having an impact on students. Undergraduate college enrollment is down 2.5 percent a semester, in part because many low income students, community college students and international students have stopped attending because of the pandemic.

To be sure, every student has their own reason for choosing to pursue a master’s degree. My name is Tarrant’s. I’m 22 years old and I’m earning a master’s degree in conflict resolution at Georgetown University. My name is Liz Saccoccia. I’m 28 and I am studying a Masters of Analytics at Georgia Tech Online.

My name is Taelor Malcolm. I am 23 years old and I’m studying urban planning at the Graduate School of Design at Harvard University.

I actually came into the master program straight after my undergraduate program, which was international business and economics. I did international relations at the University of Delaware. And as I was applying for jobs, I realized, oh, people are not going to know where to put me.

So I was like, I’m going to do twofold. I’m going to go somewhere where there aren’t a lot of networking opportunities and I’m going to earn a degree that could kind of give me some some direction

I have been working at the World Resources Institute and have really kind of understood that additional skills and data analytics are really important for doing research in the environmental sector.

And early research shows that workers with advanced degrees, such as masters and PhDs (view abbreviations degree) have been significantly less impacted by the economic fallout caused by the pandemic. Pew Research Center found that since the pandemic began, highly educated workers are significantly less likely to have lost health insurance or to have struggled paying bills.

And Federal Reserve data indicates that the unemployment rate is two times higher for high school graduates than it is for those with a master’s degree. The conflict facing students, however, is that the experience of earning that master’s degree has changed dramatically.

Add in fees and room and board, and those totals increase to nineteen thousand five hundred seventy dollars and 43 thousand three hundred and eighty dollars per year respectively. Few schools have significantly reduced costs for graduate students since the pandemic began.

This paper is a sign that you’re waiting to be told the next thing to do, whereas in person it feels like you’re interacting in person was very collaborative, not only with your professors, but with other students. If I had an issue with my Adobe suite, I could just raise my hand and wave somebody over. The online experience is not really like that. You’re not around people as much.

You have to schedule things like pay for college.

You’re paying for the facility usage as well. You’re paying for being in the classroom when you’re not using those. I feel like you shouldn’t have to pay for it. It’s not the education that they were expecting. So they really have to weigh the costs and benefits of taking on the debt that I have accrued thus far is about– Almost $100,000.

However, universities and experts emphasize that offering online education is not necessarily cheaper to provide. It turns out that online instruction is not less expensive for the colleges when strange research college departments that have chosen to move learning online over the past several years, he found that schools were not able to significantly cut costs.

He points out that building software, developing online curriculum and expanding tech support isn’t cheap, especially on a shortened timeline like schools have faced during the pandemic. It turns out it doesn’t really save you much money, if any money, to shift online holding kind of constant the quality of what you’re doing.

This quality in online classes and technical support and networking opportunities appears to be key in whether or not experts and students believe in online master’s is worth the expensive price tag.

I honestly don’t think I would suggest going to get their masters in a recession just to get their masters. It could make them more viable once the recession is over. But I don’t know if I don’t know if it’s always the best choice. One big factor is how employers view online advanced degrees. Will they hold the same weight or will an even cheaper option disrupt the market completely.

If companies start to accept more of that Coursera degrees or online or certificates a bit more. I’m actually kind of interested to see if that will take the place of formal education. Online providers like Coursera, ADEX and Khan Academy offer courses, certificates and credentials for little or no cost.

Proponents of the models say that if companies begin to value these nontraditional online learning pathways like they do traditional graduate degrees, the whole system could be turned upside down. Google has created its own certification program where if you get through that and it takes months, not years at Amazon, once again, they’re trying to hire tens of thousands of engineers every year.

They are creating assessments, computer based assessments that if you can pass this and write the code, you’re in the process, you’re in the maybe even ahead of many college graduates. And if these types of employers start saying a college degree is nice, we’ll take a look at that. But here’s some other paths. And by the way, they’re free.

I think other people are going to take notice and follow their lead.